ARGX-118 was engineered in collaboration with Prof. Bart Lambrecht, M.D., Ph.D. from VIB.

He uncovered the immunology breakthrough that allergic airway inflammation is a crystallopathy caused by Charcot-Leyden crystals (CLCs). Together, argenx and Prof. Lambrecht engineered prototype therapeutic antibodies to dissolve these crystals.

ARGX-118 is the result of this collaboration to try to address airway inflammation in a different way.

This is the story of Prof. Bart Lambrecht and how a seemingly crazy idea kickstarted a journey to develop a potential treatment for asthma and airway inflammation. It’s a story about a passion for science, and collaboration between academia and biotech.

The VIB Center for Inflammation Research in Ghent is mainly studying inflammatory diseases. Asthma is one of the diseases that is very close to Prof. Lambrecht’s heart. It is also a very common disease affecting about 8 to 10% of people.

The Charcot-Leyden crystals played an important role in the discovery process. “We knew, that in this disease, proteins which are normally in a soluble state, can crystallize. And these protein crystals are known as Charcot Leyden crystals.“

This had been known for 150 years but nobody had focused this aspect of the disease until the partnership between Prof. Lambrecht’s team at VIB and argenx. “We have unraveled what these crystals are doing. We found that the crystals are made in the airway of severe asthmatics and that most of the people that you see in the clinic already have sticky mucus with Charcot-Leyden crystals in them.”

The search for antibodies

To accelerate the discovery process Prof. Lambrecht was looking for antibody engineering expertise: “We had some experience already with argenx, in developing antibodies. They have a very efficient platform to generate antibodies.”

Initially, the goal was just to neutralize the target protein, Galectin-10, which is the build-up of Charcot-Leyden crystals. But beyond expectations, the team demonstrated that the antibodies were able to dissolve existing crystals as well by attacking the component protein.

“A crystal that can stay in patients for years, that is super stable. Then you design an antibody that is attacking that protein.”

It was much better than we anticipated. All of a sudden, the crystals that seemed unresolvable, resolved in front of our eyes.

The collaboration with argenx

“As an academic-physician-scientist, your ultimate dream is to translate your findings into a product. Through our collaboration with argenx we had access to their key technologies. It enabled us to elucidate the crystal structure and we discovered how the antibody could dissolve the crystals. That created a whole class of antibodies we can work with. The speed by which this was achieved, surprised all of us. “

Finally, Prof. Lambrecht explains why trust between academia and biotech is so important and what a solid collaboration can achieve: “For these types of relationships between biotech and academia, we need a lot of trust. That both the inventor and the group of scientists who discovered the target, have a feeling of ownership. They have to be involved in the project but it is not your own baby anymore. It is a kind of shared parenthood. And if you can find each other there, you build these long-term relationships that could potentially lead to inventions and to products.”

“My hope is that we will be able to turn ARGX-118 into something that will benefit patients with severe asthma.”

ARGX-118 is designed to bind to an epitope of Galectin-10 that is critical for crystal packing. It thereby not only prevents Galectin-10 crystallization, but also rapidly solubilizes Charcot-Leyden crystals (CLCs).

CLCs are frequently observed in the mucus of patients with eosinophilic respiratory diseases and promote type 2 immunity and mucus plugging. By nebulization of ARGX-118, argenx aims to improve the viscoelasticity of mucus. 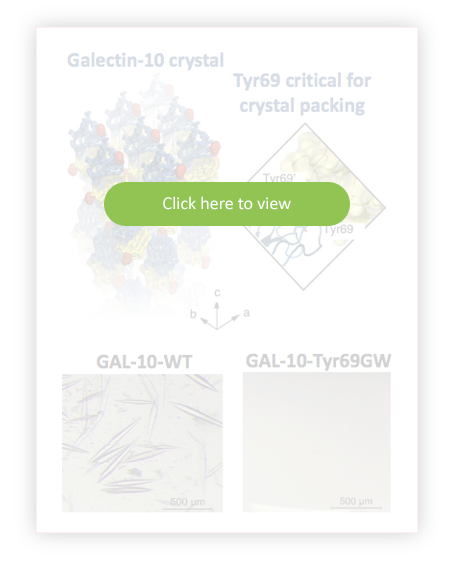